How Are Earthquakes Measured?

Two different viewpoints underpin the most important measurements related to earthquakes: magnitude and intensity. To scientists, an earthquake is an event inside the earth. To the rest of us, it is an extraordinary movement of the ground. Magnitude measures the former, while intensity measures the latter.

Magnitude describes the overall size of an earthquake as an event in the earth. Magnitude represents the total energy the earthquake radiates, and is calculated using information on how large an area moves, the distance that one side of the fault moves past the other, and the rigidity of the rock.

The international standard for measuring earthquake magnitude is called the moment magnitude scale and was formulated by Caltech seismologist Hiroo Kanamori with alumnus Thomas Hanks.

Caltech's Charles Richter conceptualized magnitude. He developed a method to numerically report the relative sizes of earthquakes before earthquake magnitude could be measured directly. He described the first magnitude scale, which came to be known as the Richter scale, in a paper published in 1935.

Intensity describes how strong the shaking is at a given location. In the United States and many other locations, intensity values are described with Roman numerals from I (barely perceptible) to X (widespread destruction), using the Modified Mercalli Intensity scale.

This definition of intensity requires a subjective judgment by an observer. For instance, if the shaking is strong enough to awaken most people, then the intensity will be assigned a level of V. Today, scientists also can measure instrumental intensity directly, calculating and assigning intensities based on recorded ground shaking in different locations.

While an earthquake has just one magnitude, its levels of intensity decrease with distance from the epicenter. The waves get smaller as they travel away from the fault. Think of a lightbulb: It has one wattage, but the brightness that energy produces decreases with distance as the light spreads out.

Intensity also can vary depending on geology. Earthquakes may produce smaller or larger waves when they encounter different soils and where bedrock is near the surface or buried deep under sediments.

How is magnitude measured?

Magnitude is estimated using data from multiple seismograms. Estimates are made by calculating the total energy from the rupture area times the average movement on the fault. These factors can be reconstructed from seismograms or measured directly in the field by geologists, which makes the moment magnitude scale the first based on measurable physical factors.

Seismic networks detect ground motion and record it as seismograms. The most reliable data comes from sensitive seismometers installed below ground. These instruments sense and measure vibrations in the earth around them and record the amplitude of those vibrations over time as the wavy or spiky lines of seismograms. An example of one such network is the Southern California Seismic Network, operated by Caltech and the U.S. Geological Survey (USGS), which has recorded earthquakes since the 1920s.

Distributed Acoustic Sensing (DAS): These networks employ fiber-optic communications cables that are already installed underground. DAS sensors send beams of light down cables and detect differences in the travel time of reflected light when seismic waves jostle the cables. Caltech's Zhongwen Zhan and his colleagues have used this approach to track aftershocks from California's 2019 Ridgecrest earthquake sequence and create a citywide earthquake-detecting network in Pasadena.

Accelerometer arrays: In this type of network, pioneered over the past decade through Caltech's Community Seismic Network, small sensors installed in the ground and hundreds of public schools and other buildings send motion data to the cloud. The system collects continuous three-dimensional data about position and acceleration with accelerometers similar to those used in smartphones to reorient screens. The information helps researchers learn how the ground and buildings move differently during everyday disturbances, such as truck traffic, and during earthquakes. And if a building's normal movement changes after an earthquake, that data can alert engineers to potentially hidden structural damage. 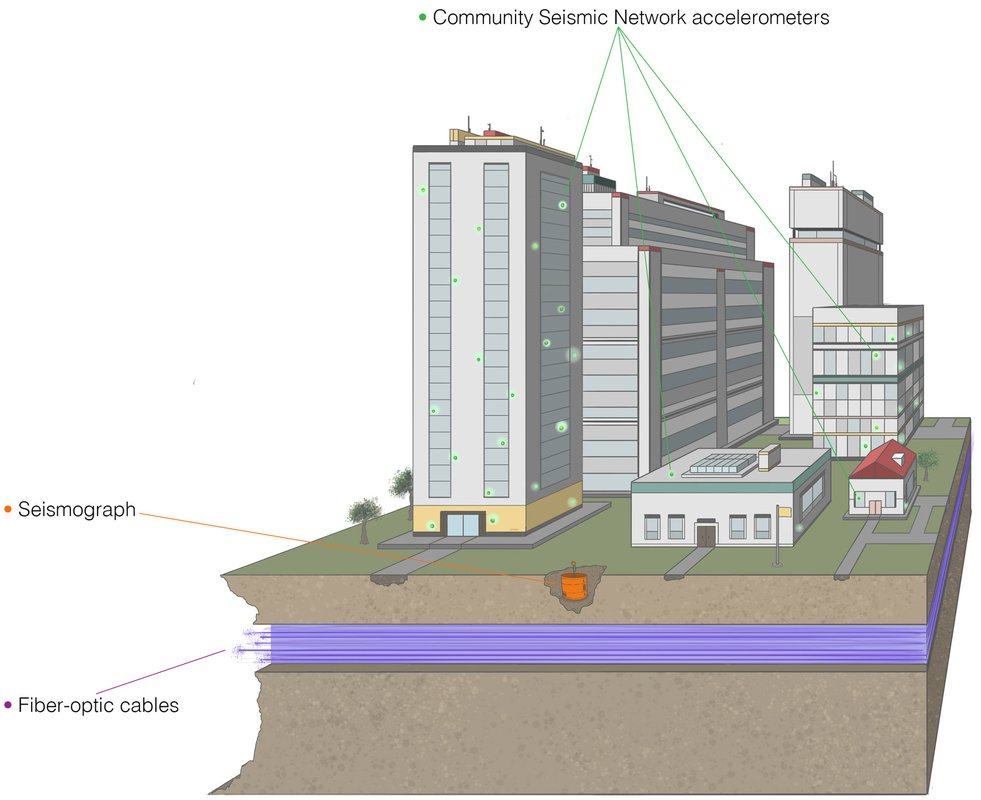 How is Intensity Measured?

To create maps of instrumental intensity, such as ShakeMaps, scientists analyze seismometer recordings of ground motion. Measures of acceleration are used to establish intensities up to VI, while the velocity is used to define the boundaries between higher intensity levels.

Qualitative measures of intensity are based on accounts from people and observations of damage in areas affected by a quake. For example, via the USGS's Did You Feel It? program, hundreds of thousands of people report their experiences of earthquakes, which the USGS filters and converts into maps called community internet intensity maps. The information from citizen science helps seismologists better understand the relationship between perceived intensity, damage, and ground motion.

Seismologist Zhongwen Zhan: Keeping an Ear to the Ground

Did You Feel It? Crowdsourced maps portray people's experience